Academically, this surely will not have been the hardest semester of my postgraduate experience, but it will probably come to be the hardest one logistically. 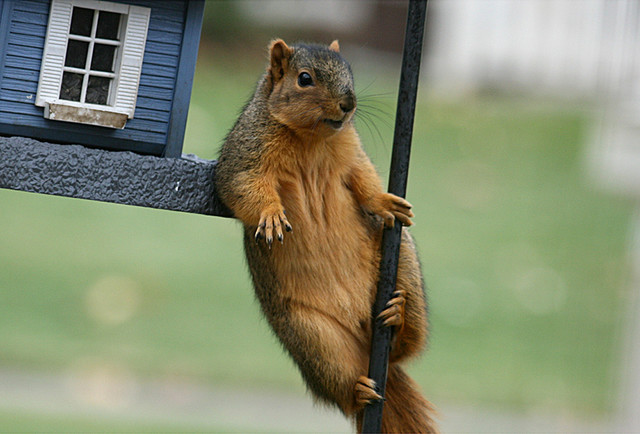 A squirrel hanging from a birdhouse has nothing to do with this blog entry, but it was one of the first photos that came up on a Google Image Search for “whew.”

The actual truth of the matter is that my semester ended eight days ago. But for the last week or so, we’ve been frantically packing our apartment so we can move to campus just after Christmas. I feel fortunate enough to blog about it all now that I’m with family to celebrate Christmas or Winter Solstice or whatever it is that we celebrate this time of year (more on that tomorrow).

But starting next semester, I won’t have to wake up so early for my early classes! I’ll still wake up early, and hopefully go through the gym routine before classes begin, but I’m most excited about not having to waste time (and gas) on the drive to and fro. That will free up time to do coursework at a more reasonable hour, cook dinner more often, sleep longer, devote some time to a community ministry and hopefully have a free weekend every now and then for some recreation. Like all of that will ever happen like I imagine.

To recap from the year that was, all of my classes ended excellently… a 4.0 semester! I certainly didn’t expect that, but I’ll take it and try to repeat it again in the spring. Two of my classes – Greek and Old Testament – essentially continue in the semester to come, and to that I will add the history of the Church of God movement (I’ll call it CHOG History) and “Christians and Old Testament Theology,” which has interested me throughout the past semester of Old Testament class. It will be exciting to interact with the beliefs of the Israelite fathers and prophets and understand how Christians can more faithfully apply that to a well-rounded base of faith.

Other than the big post-Christmas move, I have two major personal goals during the break. Those are…

And besides those things, it would be nice to add some new and fresh content to the blog for the new year. I’m sure I’ll hammer out a blog post or two once I’m settled in Anderson!

I’ve updated my “Currently Reading” section in the right-hand margin because, well, I’m reading a new book! Not that I’m no longer reading the apologetic commentary on the Old Testament… this new book – Jesus the Riddler: The Power of Ambiguity in the Gospels – just happens to pique my historical Jesus interest more.

No, not that Riddler… no matter how much the photo reminds my about one of my more favorite portraits of Jesus. But, I digress.

If you’re familiar at all with the gospel accounts – and especially, the words of Jesus as they are portrayed – you know there are many, many times when the disciples (or the crowds) simply do not comprehend the things Jesus says. The gospel writers/redactors sometimes take great joy from the fact that the disciples couldn’t figure their Rabbi out. Significantly, the writer of John identifies the instances where his readers would obviously understand Jesus words, even if those around Jesus at the time didn’t.

Knowing this, I decided to do some research into the potential ambiguity of Jesus’ message and how it might have sparked the wildly different and conflicting beliefs of Jewish-Christian groups that formed in the first two centuries following his death. This will eventually turn into my term paper for my History of the Christian Church class, where I am specifically interested in the Ebionites, Nazoreans and Marcionites, but for now, I want to share the book and the concepts it postulates. I believe it could introduce you to a new way to view Jesus!

From his ministry, we know that Jesus was a public orator. We also know that he would frequently teach only his disciples, and that at times he would engage in verbal confrontations with groups of Pharisees or Sadducees. But these facts alone don’t make him a riddler. Two essential elements of his conversation would qualify him as that:

Tony LaRussa has been manager of the St. Louis Cardinals for almost as long as I can remember, since 1996. And when you listen to him answer questions at a press conference or on a radio show, generally you walk away wondering what exactly he said. His answers can frequently go either way, qualifying him as a riddler. This is a picture of LaRussa with a dog, for no reason in particular.

If I haven’t lost you yet, let’s come back to Jesus (isn’t that a Third Day song?). As I said, Thatcher’s book is a foray into the historical Jesus from an angle that is entirely fresh to me. Part of this, however, is due to the nature of Jesus’ sayings that qualify as riddles: often times they do not meet the principle of multiple attestation. In other words, a riddle may appear in the gospel according to Luke, but not any others. Or sometimes, the riddle may be part of a story that appears in all four gospels, but the riddle itself is only contained in the gospel according to John. Historical textual criticism values multiple attestation is a marker for sayings that are more likely to actually date back to Jesus, and in a lot of cases the Jesus Seminar had major doubts about riddle material.

But, this isn’t necessarily the case for the riddle construct that Jesus is ascribed to have used. And many of the parables can be understood as an extended form of riddling that also accompanies storytelling. So, are there implications that accompany the view of Jesus the Riddler? Thatcher writes (emphases his):

I assert that it is likely that Jesus asked and answered riddles on a regular basis; I am not concerned about particular riddles recorded in the Gospels but about whether he engaged in riddling at all. I claim that if Jesus engaged in riddling at all, this fact is significant to key aspects of our understanding of his social posture and message.
…

In other words, my argument does not depend on whether or not Jesus actually asked people how the Messiah could be both “David’s son” and “David’s lord” at the same time. My argument depends, instead, on the fact that Mark, Matthew, Luke, John, Thomas, and virtually every other extant ancient source for Jesus’ teaching claims that Jesus said things like this to people on a regular basis.

I am presently about a quarter of the way through the book, and I am finding that Thatcher makes very thought-provoking arguments. While I may not start thanking God in prayer for sending the Great Riddler to this earth, this is a wonderful new way to think of Jesus. And, with these thoughts in mind, it’s much easier to be sympathetic to the way Gnosticism – in particular, the Gospel of Thomas, bloomed. Doubtlessly, I will seek to post additional blog entries when new ideas from the book excite me, and once I have read it, I will post my overarching conclusions and takeaways.