Yes, I know I wrote yesterday that I didn’t foresee posting an update from the dig today, but little did I know that we would make not one, but two breakthroughs in the plaza section of Area M! So, I will instead share the news but keep the post short.

The team of five (all from South Africa) digging in the south side of the plaza kicked off the morning by uncovering evidence of a stone floor abutting their massive wall, which is a big deal given that teams have been digging in this area for two-plus seasons with little success, other than finding a heterogeneous mix of potsherds, bones, and other nonsense from different eras. Finally, it seems, we are reaching the bottom of the fill, and stumbling upon the clues that will help us understand what purpose our structure once served in the Middle or Late Bronze Age. By the end of the day, they revealed about as much of the floor as I’ve photographed below. 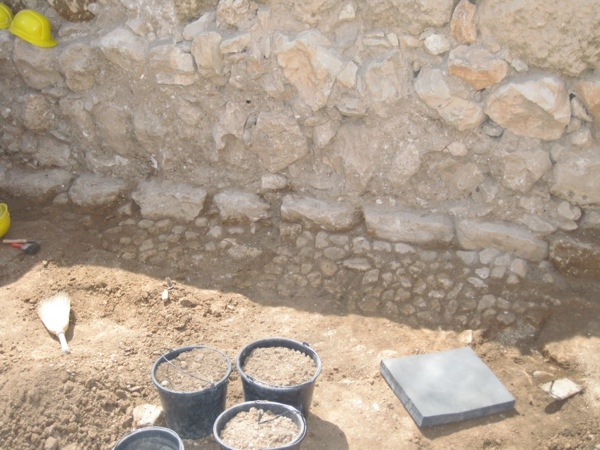 The carefully crafted stone floor, which seems to be sinking a little bit in places as they move toward the center of the plaza, butts up against some nice rectangular stones that act like baseboards.

Furthermore, there is a pretty good chance that this stone floor will spill over into our section of the plaza, as our line of division (a bulk wall) has been artificially created and can be removed at any time.

Not ten minutes after their team first uncovered evidence of their floor, we in the north side of the plaza hit a sequence of large rocks on the north end of our section! The stones appear now to form a thick wall that spans our section from east to west, as shown below. 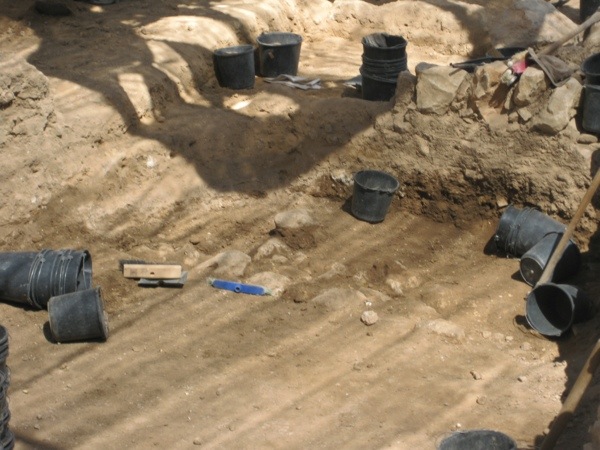 Our stone wall may be difficult to see, but it runs parallel to the blue brush in the photo.

It’s still too early to say what exactly this wall means, or what function it served. It seems rather low for a wall, given that it is at roughly the same level at which the south plaza team found their new stone floor. We can safely say, though, that it is not a wall, because the rocks here are bigger, more jagged, squared and awkward than floor stones (generally smooth, rounded and small) would be. There is a chance that this wall could extend all the way to the west of Area M, be very large in stature, and help to explain why the mud-brick wall adjacent to our plaza section never collapsed and is so well preserved. But for now, it is refreshing to find something that is exciting not only to us, but also to the dig directors! Today truly was a day of Easter eggs at Hazor, and it was nice to find something that adds potential to the season. We just hope we’ll still be around when the entire thing comes to fruition!

One last thing: speaking of the adjacent mud-brick wall, I hinted at the large pithoi jars that have been found yesterday, but didn’t have a photograph attached. Here are the rims of those pithoi jars, which may sit up to a meter or so below the current surface! 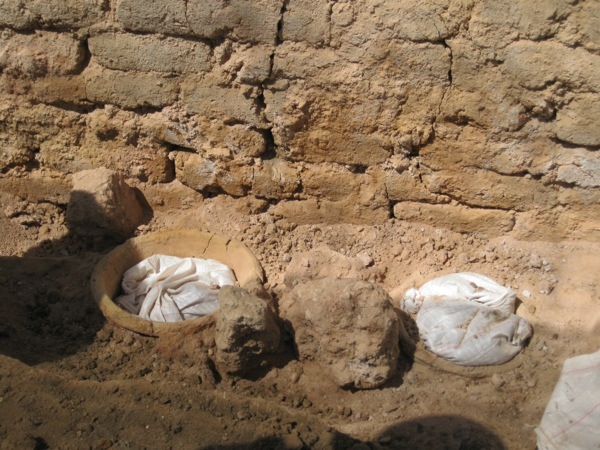 The mouths of these pithoi jars are currently stuffed with filled sandbags to prevent the pottery from breaking or crumbling any further. It appears that the jars are more or less intact, which is a great find and will eventually help the archaeologists at the Hebrew University to understand what they (and the room they were found in) were used for.

Have a good weekend everyone!